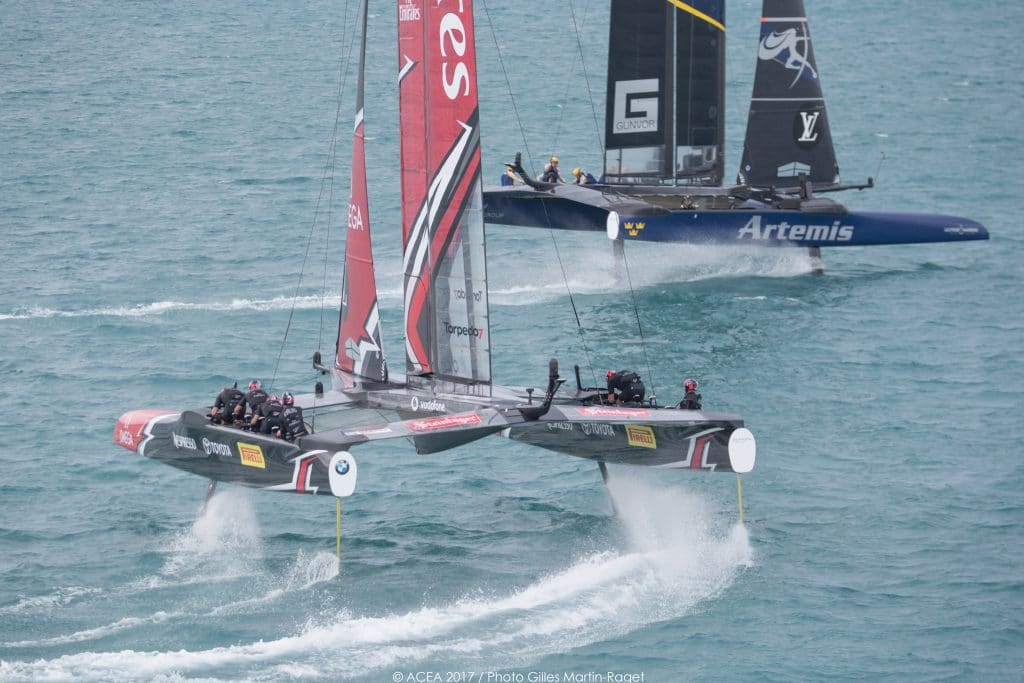 Nathan Outteridge, the skipper of Artemis Racing, slid off the back of the Swedish challenger at a critical point in the third race of the day, immediately handing the lead to Burling, who never looked back.

The Kiwis now hold a 2-1 lead in the first to five point series.

“I think I just got a little flick off the back of the boat,” Outteridge explained. “These boats turn quite quickly and we sprint across. Just as I was crossing, we straightened the turn, which had me sliding down the aft beam…

“Had I not slipped off in that last race I think it would have been 2-1 for us, so it’s a bit disappointing, but overall we’re very happy with our performance today.”

“It was an incredibly tricky day,” said Burling. “We were very happy with how we were going. We struggled a little bit with the starts but there were some tight-fought battles. We’re happy to have battled back into that last race and it was shaping up to be a very close top mark before Nathan went off.”

The final stage of the Louis Vuitton America’s Cup Challenger Playoffs started on Saturday afternoon in Bermuda in light to moderate winds of 8 to 11 knots.

The match has two great young helmsmen pitted against each other – Nathan Outteridge of Sweden’s Artemis Racing and Peter Burling of Emirates Team New Zealand.

The teams went into the day with different set-ups: Artemis Racing with its big, light wind boards, while the Kiwis had smaller foils, thought to be more efficient in stronger winds.

The teams didn’t engage closely in the prestart of race one and it was advantage Outteridge when the starting gun fired as he crossed the line on time, with speed, three lengths clear ahead of the Kiwi boat. By the time the teams reached the bottom gate for the first time, Burling had narrowed the lead to just 5-seconds.

With two efficient tacks on the upwind leg, New Zealand closed the gap down and with the boats approaching the edge of the course, Artemis Racing made an unforced error, sailing just outside the course boundary and picking up a penalty. Burling and his Kiwi team banked the advantage and extended the rest of the way to go up 1-0, with a winning delta of 47-seconds.

Artemis Racing’s Nathan Outteridge won the start cleanly over Emirates Team New Zealand’s Peter Burling. Outteridge set up to leeward and was first across the starting line for the second consecutive race. On the reach to mark one, he kept pushing the Kiwi boat to windward, away from the mark, before turning downwind and accelerating into the lead.

Once again, Burling kept it close, not splitting until the final windward gate, hoping superior boat speed would allow him through. But Outteridge and his tactician Iain Percy relied on every trick in the match racing book to cover their opponent, staying between the New Zealanders and the next mark, often pushing disturbed air onto the Kiwi wing.

It was a hard-fought 15-second win for the Swedish challenger, to level the Louis Vuitton America’s Cup Challenger Playoffs Final at 1-1.

Race Three was an even start, with both boats crossing the starting line simultaneously. Outteridge was set up slightly to windward and vulnerable to a luff, but he accelerated well off the starting line to lead into mark one by less than 3-seconds. Trailing into the first bottom gate for the third consecutive time, Burling finally elected to split away, looking to make a gain through a favorable windshift.

It nearly worked. The boats converged at the top gate with Outteridge ahead by less than one length. With a split on the downwind leg, Artemis found a vein of wind to stretch slightly, but a bad gybe approaching the gate meant the lead was just 3-seconds. The first cross on the upwind was to Outteridge by less than two boat-lengths. The next one was even closer and Burling had the favored right hand side for the final meeting.

But in a dramatic turn of events, on the final tack to the gate, Outteridge slid off the Artemis Racing boat as he sprinted across the platform. Without their helmsman, Artemis surrendered the lead immediately and limped down the final run, retiring from the race after the Kiwis finished for the win and a 2-1 series lead.

Three races are scheduled on Sunday, with the first start at 14:08 local time.