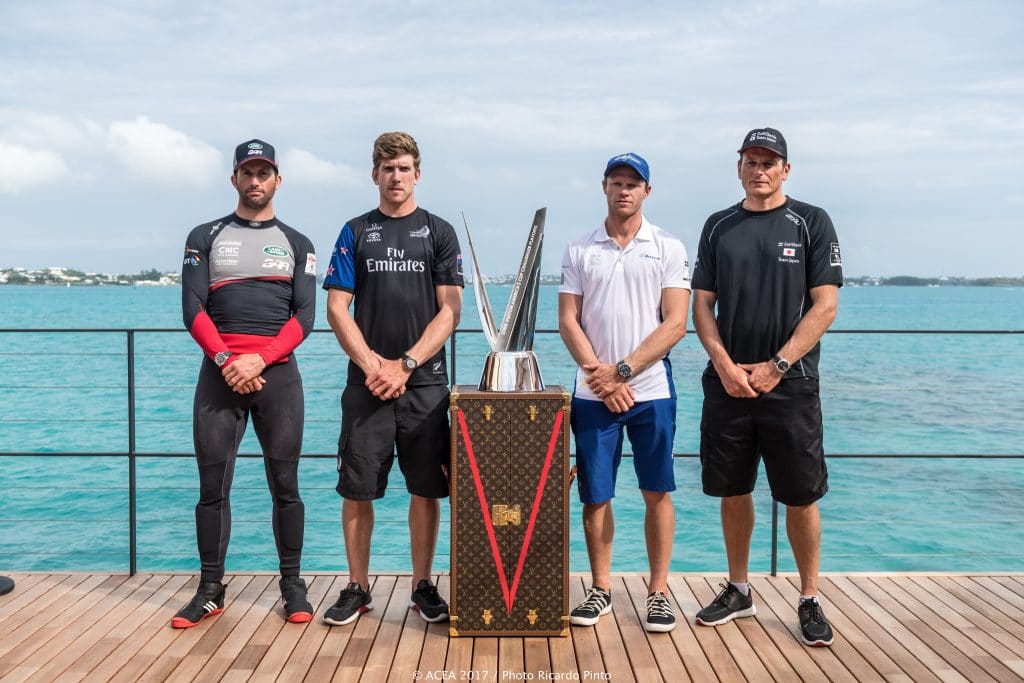 At the conclusion of the Louis Vuitton America’s Cup Qualifiers on Saturday, Emirates Team New Zealand finished second in the final standings, one point behind eventual winners ORACLE TEAM USA.

However, with ORACLE TEAM USA’s place in the America’s Cup Match, presented by Louis Vuitton, already assured as the Defenders of the ‘Auld Mug’, Emirates Team New Zealand were handed the opportunity to select their opposition in the next stage after finishing as the next highest seeded team from the final Louis Vuitton America’s Cup Qualifiers standings.

“We have sat down as a team and decided we would like to pick Land Rover BAR,” said Peter Burling, who also took the opportunity to pass on the condolences of Emirates Team New Zealand to the family of New Zealand native Mary Elizabeth McKee, who passed away in Bermuda on Thursday night.

Turning back to his team’s choice of Land Rover BAR, Burling explained that, “We believe with the forecasts over the coming week that it represents our best chance of progressing through.”

In response, Land Rover BAR helmsman Sir Ben Ainslie, whose team finished third in the Louis Vuitton America’s Cup Qualifiers standings on six points, is prepared for the challenge ahead.

“It is going to be a close race, but to win the America’s Cup you have to beat all the teams,” said Ainslie.

“Emirates Team New Zealand have certainly proved through this qualifying round to be sailing really well. They are very fast and so for us it will be a real battle.

“However, we are up for it and looking forward to it.”

“We’ve done a lot of racing against Artemis Racing over the last 18 months and we’ve had some great battles,” said SoftBank Team Japan helmsman Dean Barker, whose side finished in fifth place with three points in the Louis Vuitton America’s Cup Qualifiers.

“We know they are a very strong team, I’m sure the racing is going to be very close and it will be interesting all the way through,” said Barker.

“We are excited to be here,” said Artemis Racing’s helmsman Nathan Outteridge.

“We know that to go and beat ORACLE TEAM USA (in the America’s Cup Match, presented by Louis Vuitton) we now have to beat SoftBank Team Japan and Emirates Team New Zealand.

“We are up for the challenge and excited to go and do that. We’ve beaten them (SoftBank Team Japan) twice in the qualifying races and that gives the team some confidence moving forward.”

The eventual winner of that stage of the competition will then become the official Challenger to ORACLE TEAM USA for the 35th America’s Cup.

With a two week break from race action ahead, helmsman Jimmy Spithill and his team will continue to develop their boat and be ready to face the eventual winner of the Louis Vuitton America’s Cup Challenger Playoffs.

“The guys in the shore team work almost 24 hour shifts to make sure our boat is always prepared and to see that as sailors is incredibly motivating.

“That gets us all hungry and makes us want to reward the guys on shore.

“I don’t think we have been consistent enough throughout the qualifying stage and so we will all be working hard to get the best out of what is available to us.

“In these next two weeks we will look at every component of our systems. We can’t afford to sit back.

“We need to be faster to win this America’s Cup. There is a lot left for the taking and we will be making all the steps to make sure we are more efficient in every way.”

A final day defeat to Artemis Racing confirmed their position at the bottom of the standings but helmsman Franck Cammas believes the experience from this campaign will stand them in good stead for a possible future America’s Cup appearance.

“This campaign saw us take two good wins (over Land Rover BAR and Artemis Racing) and that will give us good momentum to continue to the next America’s Cup,” said the French helmsman in his last 35th America’s Cup press conference.